'Onnane - Who Am I And Why Am I Doing This Crazy Trip? 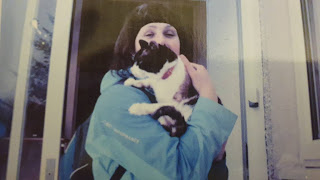 Alice and I before heading out onto the bike and into the cold  ( Dounreay, Dec 2009)

How I Ended-Up Doing This Crazy Trip

This true story begins ten years ago on the East Yorkshire coast of England.

This blog is written retrospectively as if the event were occuring in the present.

It is an account of a risky Winter cycle trip towing a cat in a trailer on a very tight budget.  All I know is that we’re heading North.  It’s a story of fate, family squabbles, adventure, survival, solitude and resilience in the face of extraordinary challenges. How far will we get and will we be OK!

Truth is Stranger than Fiction

Hello, my name is Hilary and my cat’s called Alice.  I live with my brother Leo in Bridlington, England and my mum is re-married and lives two miles away with her husband Dennis and my ninety-four year old grandad.  I'm in my early forties, Leo is two years younger and Alice is thirteen and we’ve lived in the same house since the end of 2003. Leo works as a paint sprayer and I’ve been driving trucks part-time. The past ten years have been a bit of a rollercoaster and I’ve had quite an interesting life up until now…[i]

In 2003, due to depression I left my MA degree course at St Andrews half-way through, had a gender operation and several weeks later passed my Class I LGV test. I had night trunking driving work within two weeks of arriving back in Yorkshire. I’ve been driving trucks on-and-off since then, but I was never able to settle into the demanding routine and hours of this work partly because of various health issues and repeatedly being offered unfavourable jobs by agencies.

Now, I’m not a victim and luckily still have my arms and legs, but have enough of a history and baggage to show that this solo cycle trip heading North is not only bad-timing, is almost masochistic.

So with fate and misfortune dealing their cards, I take the opportunity for this escape bike ride with an added measure of adventure, calculated risk and some experience to boot. But is it enough to carry Alice and I through the challenges we are to face considering the tight budget and with nowhere definite to head to!

Join me in the next instalment to find out.


[i] Gender Dysphoria wasn’t recognised in mainstream medicine in the 1970’s, but even if it had been my family would’ve ignored it completely.  Now I am not playing the victim here and it was tough growing-up, but I adapted and tried to overcome by spending all my spare time with the boys playing football…and yes I was good. I could run anyone on the pitch into exhaustion and I was great at tackling and scoring goals. I almost felt sorry for my team mates because they hardly had a touch of the ball. That feeling of exhaustion and being respected after a game helped to make-up for my continually increasing thoughts of why I didn’t have a girl’s body instead.

My friends knew that I had always wanted to play for St Andrews United, but when I was fifteen our family moved us three hundred miles South to Flamborough, East Yorkshire and no-one played football there so I was stumped because all the boys played cricket instead.  It was around this time that I would isolate myself for days-on end in my attic bedroom and didn’t have any female clothes to make me feel better and because my family were very strict and old fashioned I could not tell them for love nor money.  Instead I joined the Air Training Corps and this became the start of my plan to escape the torment.

Just after my eighteenth birthday, in 1984 I joined the Regular Army and signed-up for nine years with the Royal Engineers.
I continued to excel in fitness and running and found that I could supress my dysphoria for several months at a time, simply because I was too busy and exhausted with military life and my cross-country running commitments.  Still, this wasn’t enough and after four years in Cold War Germany and the end of a two year relationship with a German girl I volunteered to undergo Pre-Parachute Selection training at Aldershot in 1989.  I thought this is It, this is my answer…I need to be tougher!

I began the para course at 5 Airborne Brigade, and remained the very quiet soldier, the ‘grey man’ as they say because all I wanted to do was pass this course and achieve top marks.  It was my escape!  I did well and managed to pass with very good grades and earn the coveted maroon beret.  However, near the end of P Company during one of the assault course obstacles-with a high wall and water jump-someone landed on my head from above and I felt my whole back weaken.  I straightened-up as soon as I could and carried on and tried to forget about what happened.

Parachute Jump school awaited and half-way through, after one balloon and two aircraft jumps we were fitting-up for a night jump in the hanger prior to boarding the Hercules.  It’s a ‘buddy-buddy’ routine which requires your parachute harness straps to be tightened by someone else from behind as you’re bent over slightly. As soon as ‘M’ tightened the final straps I felt my back go completely weak and I could barely straighten myself-up.

I tried to wiggle about with the parachute on and correct my back, but it was hopeless.  I could barely stand with it on…so asked M to help me remove the chute.  I tried walking a little bit in the hanger between the sticks of guys completing their final kit checks, but couldn’t straighten up properly…when I tried to, it was extremely painful. I was in a state of shock and I’d come through so much training to get here and now this! I tried waiting for another five minutes to see if it improved, but it was no use…my lower back had completely seized-up.

I had comments from some guys saying I was trying to dip-out of the jump, but that was bullshit.  I was the first volunteer to jump from the balloon cage two jumps earlier and I was not definitely not afraid of jumping.  I wanted my wings more than anyone!

I reported the injury to several of the RAF PJI’s (Parachute Jump Instructors) in the office, but they were not interested.  They did little to help me other than to say walk back to your billet. I tried to walk upright, but it was so painful…and the accommodation was a mile and a half-away.  I thought, well I have started walking now so I better try and keep going…it took ages.  I couldn’t understand how they never offered to have a Land Rover take me to the medical centre.  But then, I had broken the unwritten rule - never let anyone see you ‘wimping out’ before a jump, even if you are injured. 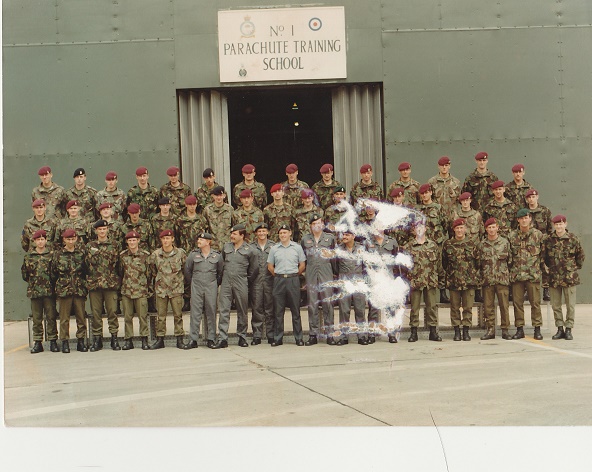 You can break all the bones you want on landing, but don’t expect sympathy with any injuries before you jump.  The next morning I had to ask my room mates to bring in a medic…I couldn’t bloody move!  I was stretchered-out and taken for treatment to RAF Wroughton where I was kept for six weeks, four of them being in traction.  A group of the guys came to visit me after they earned their wings and tormented me by pulling on the traction gear and calling me a ‘’Penguin” (the flightless bird).
The injury was effectively the end of my Army career and I spent the rest of my time either being rehabilitated at Headley Court or going through the motions in the MT section of 9 Sqn in ‘dead man’s shoes’.  Yes, the only things I earned at Brize Norton was the experience of three jumps and the nickname of ‘Pamela’.

Popular posts from this blog

March 09, 2020
Clearing the AirThe short stretch from the cold garage was a careful series of meandering right and left turns through overgrown decaying foliage and the path was barely visible until it straightened out back to the house.Sauntering along it struck me how the garden was so drab and overlooked and how the small pond was now dry and lifeless. I didn’t know it then, but this was an ominous sign of things to come.

She busied herself with the usual morning routine while the autum rain and gusty wind began to batter the kitchen window.A familiar quick knock and the whoosh of mail hitting the floor caught our attention as the bright orange glow of the postie’s jacket faded through the smoky-glass pane as he continued his walk. Mum had always hated official looking mail…but I picked it up anyway and handed it to Dennis.
Something was bothering her, I knew because she always immersed herself in some pointless radio debate before letting-off-steam on a subject …
Post a comment
Read more

Change is Coming As time’s rolled-by in Bridlington I’ve become stagnant, dissatisfied and without true purpose and also suffering from Gender Re-assignment Surgery post-operative anti-climax, which can last several years...it's a form of depression if you like, but it feels as if there's a big vacuum in your life. I am happy that I finally had the operation, just that it's normal to feel this way for genuine trans girls. Anyway, I have always resorted to exercise to settle my mind and this situation is no different…at least temporarily anyway. So I decided to take-up cycling.

I bought a cheap used hybrid bike and after finishing my morning shift as a cleaner began by cycling eight miles every second day . After three months I was completing forty plus miles each ride. Then I purchased a sturdy used road bike, the Claud Butler Criterium, which was much lighter with plenty of gears. I enjoyed maintaining it and always looked forward to t…
Post a comment
Read more

The Author Hilary
Hi, my name is Hilary and the name of my blog is The 'Onnane Chronicles. Why have I called it this and what or who is'Onnane anyway? Well, 'Onnane actually means a different 'life road' which is especially the case for me. You will find out the trials and tribulations of this unenviable and true story I have to tell. I will be showing you How I coped cycling in Winter with a cat ten years ago...with very little money.